When your systems are part of a prestigious project, you follow the developments closely. Especially if the total project is immensely complex, takes years to complete and faces challenges like never before: the Second Long Shutdown of CERN’s Large Hadron Collider.

The Large Hadron Collider  (LHC) is the world’s largest and most powerful particle accelerator. It first started up on 10 September 2008, and remains the latest addition to CERN’s accelerator complex. The LHC consists of a 27-kilometre ring of superconducting magnets with a number of accelerating structures to boost the energy of the particles along the way. 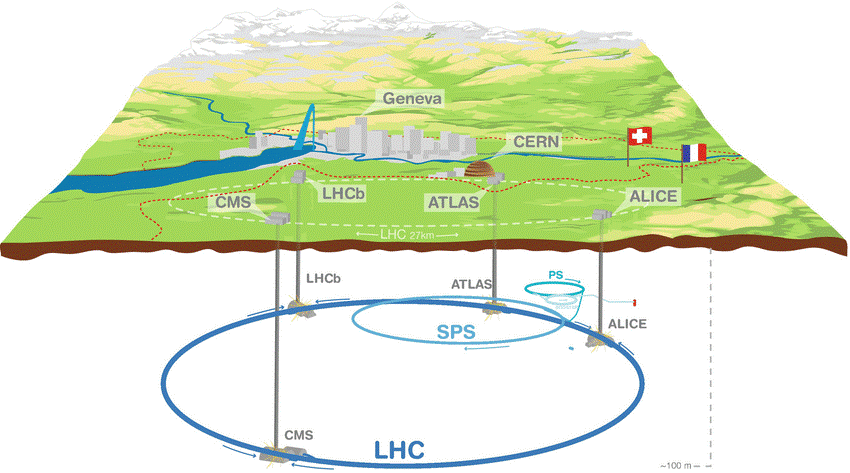 After a second period of operation of more than three years, the accelerator complex was stopped at the start of 2019, for an initially planned duration of about 18 months. The main purpose of this Second Long Shutdown (LS2) was the LHC injectors upgrade. At the same time, full maintenance of all the equipment was performed to prepare for Run 3, which will have an integrated luminosity (indicator proportional to the number of collisions) equal to the two previous runs combined and to anticipate activities of the LHC High Luminosity project, which will begin operation at the end of 2027.

Due to the Covid-19 crisis, a new schedule for LS2 anticipates that the first test beams will circulate in the LHC at the end of September 2021, four months later than the date planned before the pandemic. To give the LHC’s four main experiments – ATLAS, CMS, ALICE and LHCb – time to complete their own upgrade programmes, Run 3 of the LHC will begin at the start of March 2022. 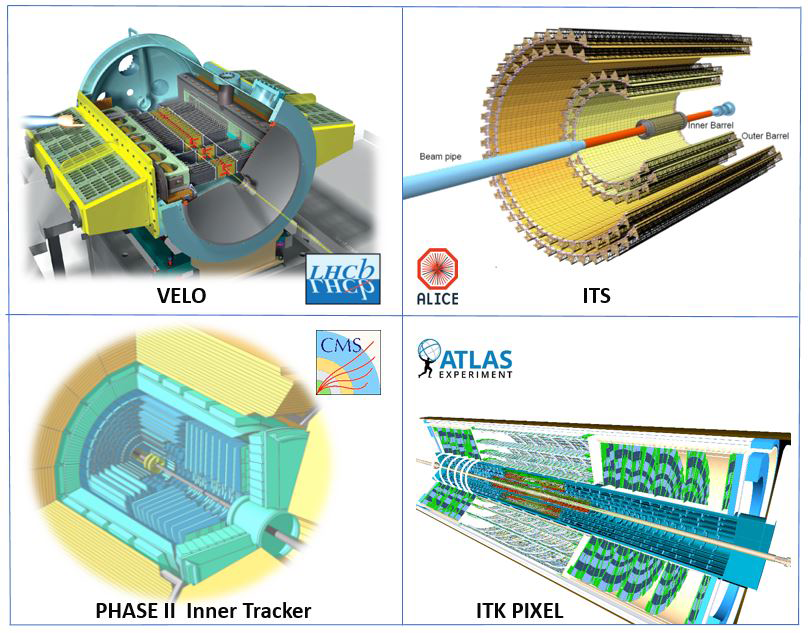 One of four main underground experiments, ALICE (A Large Ion Collider Experiment) is a particle detector dedicated to heavy-ion physics. It aims to recreate the state of matter that is believed to have existed shortly after the Big Bang. The ALICE collaboration (more than 1000 scientists from over 100 physics institutes in 30 countries) studies the quark-gluon plasma as it expands and cools, observing how it progressively gives rise to the particles that constitute the matter of our universe today. Data is gathered on speed, mass and charge from which physicists can work out a particle's identity.

The ALICE collaboration uses the 10,000-tonne ALICE detector – 26 m long, 16 m high, and 16 m wide – to study quark-gluon plasma. The detector sits in a vast cavern 56 m below ground close to the village of St Genis-Pouilly in France, receiving beams from the LHC. 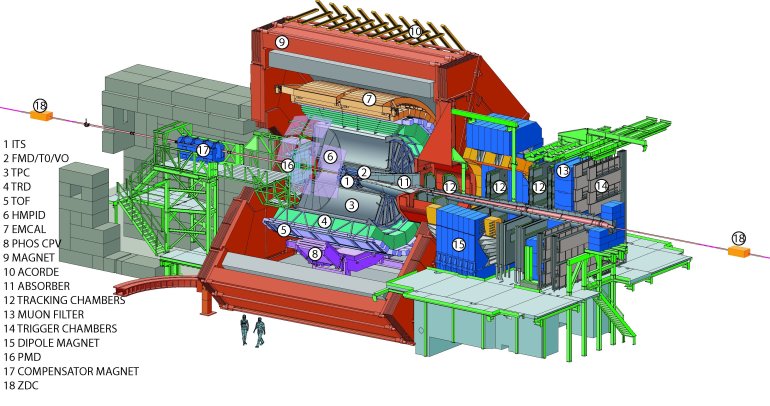 The ALICE apparatus and its various detector components.

During this long shutdown the Alice detector underwent a major upgrade. A key element of the upgrade is the substitution of the Inner Tracking System (ITS) with a completely new silicon-based detector (ITS 2) whose features will allow the reconstruction of rare physics channels not accessible with the previous layout. The enabling technology for such a performance boost is the adoption of custom-designed CMOS Monolithic Active Pixel Sensors as detecting elements.

The new ITS will increase the readout rate capability by more than two orders of magnitude while, at the same time, improving the tracking capability and the impact parameter resolution, especially at low transverse momentum. The new ultra-light tracker is constructed with Monolithic Active Pixel Sensors arranged on seven layers, with the inner layer as close as 23 mm from the interaction point. The CMOS chip (ALPIDE) which will equip the ITS has been custom designed to fulfil the stringent requirements of the new tracker.

And this is where IBS Precision Engineering stepped in. Our metrology expertise has been supplied to CERN since 2004 and this relationship has expanded into the development and realization of ALICIA, a sensor module assembly machine, built custom-made for the ALICE upgrade. ALICIA was developed to measure and assemble the 15,000 sensor chips which make up the new detector. Working closely with CERN teams across the globe, the machine accommodated changing requirements as the sensor chip technology developed; from chip size to positioning accuracy and test protocols. The first machine, ALICIA 1, passed the site acceptance test at CERN and seven more machines have since been delivered by IBS to CERN and partner sites around the globe.

The current upgrade of the ITS relies on new pixel sensors called ALPIDE, which also make up the new Muon Forward Tracker (MFT), installed a few months ago. Each of those chips contains more than half a million pixels in an area of 15 × 30 mm² and features an impressive resolution of about 5 μm in both directions – the secret to the subdetector’s improved performances. The eight ALICIA systems were used in the following production processes for the upgrade of the ITS and Muon Forward Tracker (MFT): 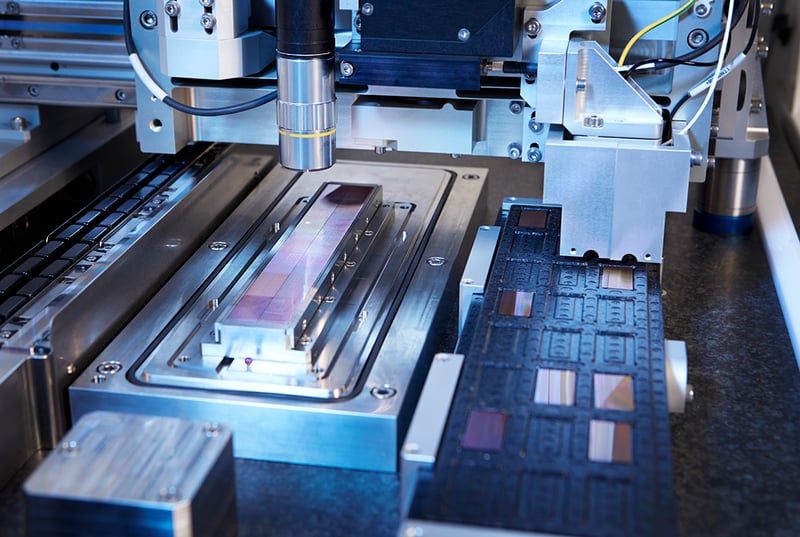 With its 10 m² of active silicon area and nearly 13 billion pixels, the new ITS is the largest pixel detector ever built. The upgrade of the ITS will significantly increase the resolution of the vertex reconstruction, making the subdetector fit for future runs with higher luminosity. The insertion of the heart of the ALICE detector around its beam pipe required surgical-like precision. 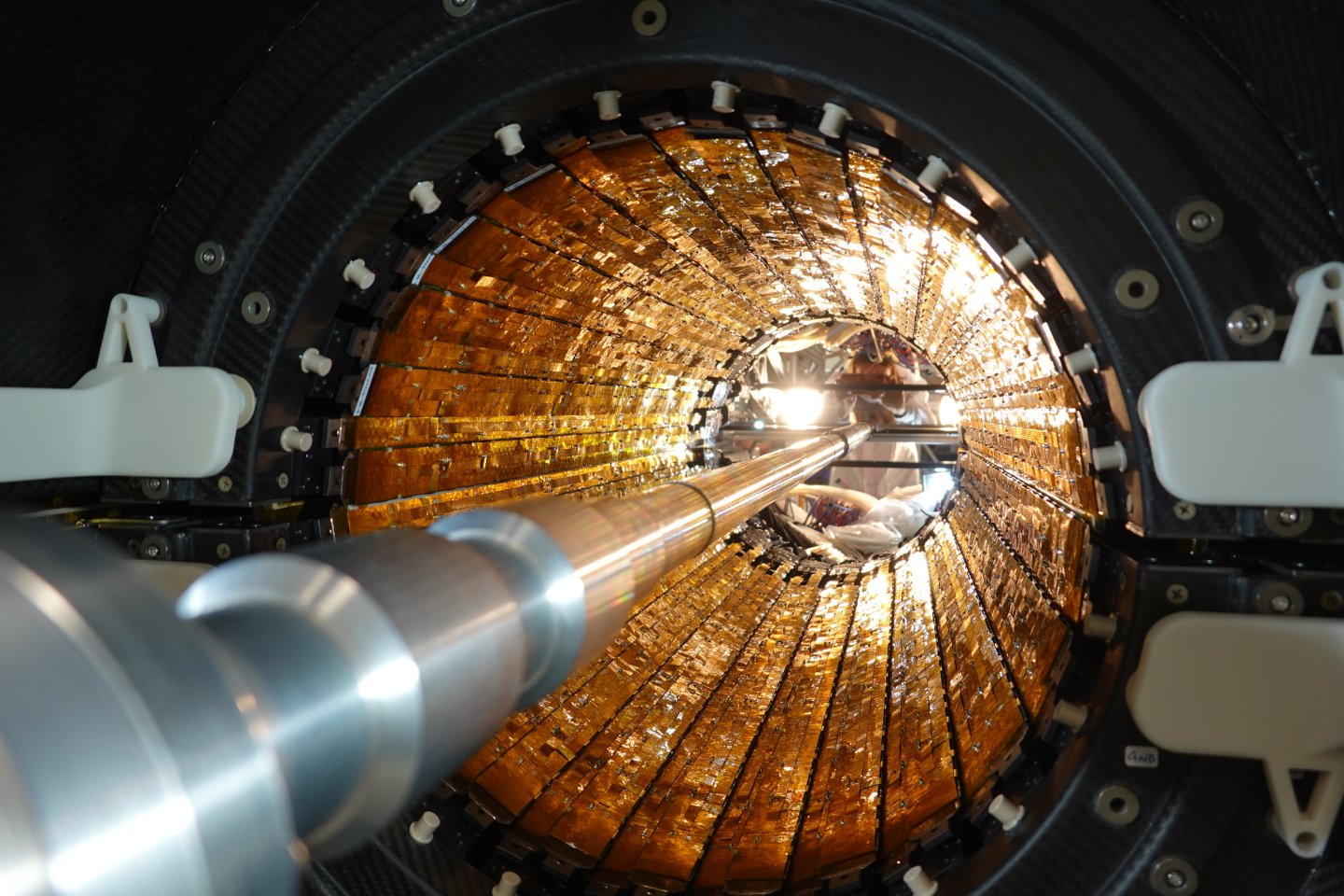 The installation unfolded in two stages, as the two barrels making up the ITS had to be lowered separately, two months apart. The outer barrel was installed in March 2021,  the inner barrel installation was done in May 2021.

The Fast Interaction Trigger (FIT) was the final piece of the puzzle and with its recent installation the last of the ALICE subdetectors has been installed and an overarching commissioning phase of a few months can now start, taking ALICE to the start of Run 3, scheduled for the end of February 2022.

See the installation video of the tracker at CERN: 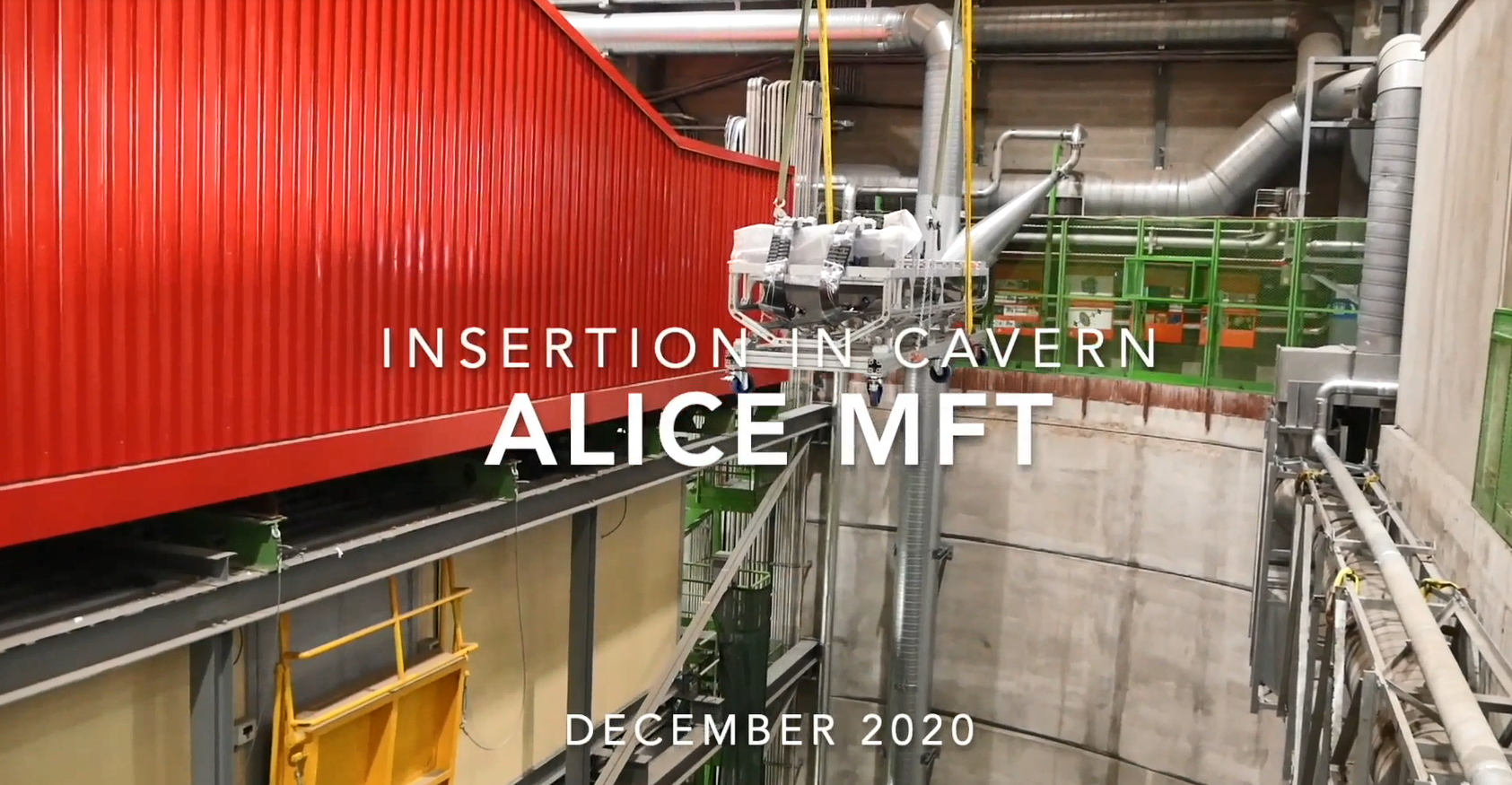 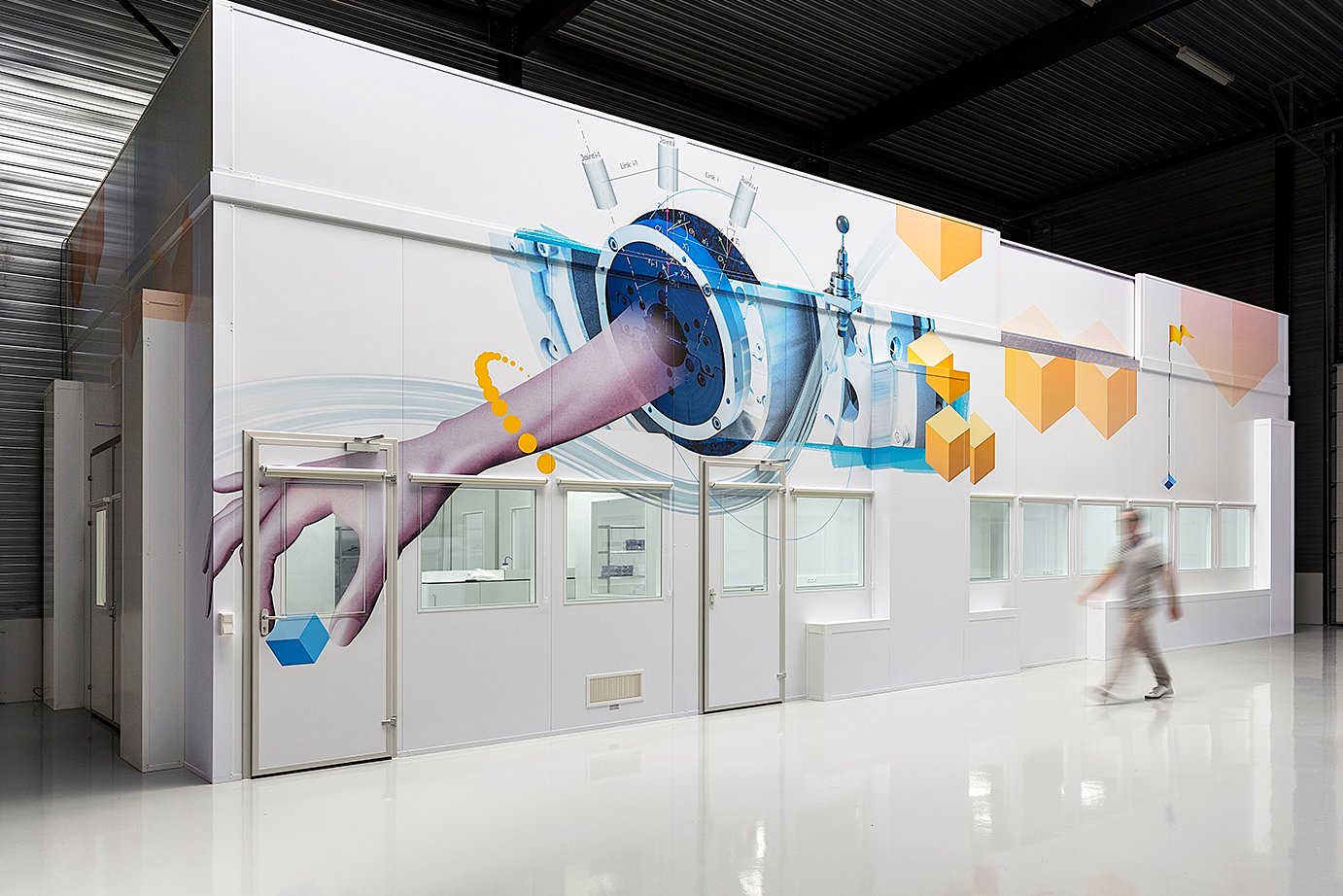 To accommodate a growing number of projects requiring cleanroom and high temperature control, we are proud to announce the completion of the newest ISO 5 cleanroom facility at our headquarters in ... 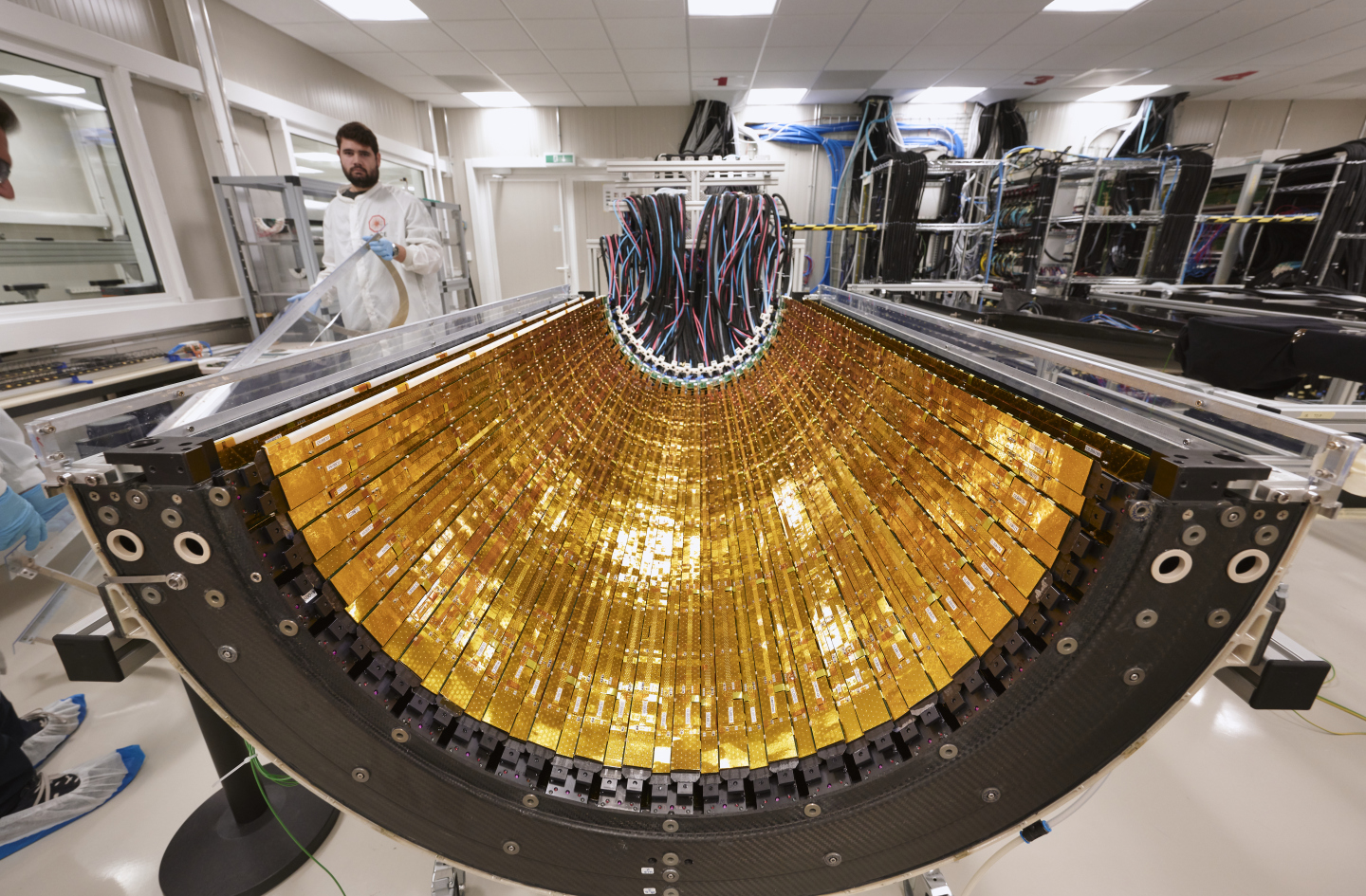 In 2015 IBS was commissioned to develop and construct a precision placement machine by CERN.